Throughout the ages people never seemed to get any work done. Planning projects was total chaos. Then the god Ag came and from chaos we were given order in the form of Agile (which is not a cult).

Knowing Agile is slowly becoming an important part of every business. Programming in C/C++, Java, Javascript, that's easy, anyone can write code. But having the skill of standing in a circle and saying what you've been working on, what you will be working on, and if you have any blockers, that takes pure talent. Even more so, rising to the ranks of a Scrum Master and being able to point to or say the name of everyone in the circle and write down how many points they've completed. Having skills like these can land you a job at any legitimate business that believes in Agile.

To be a member of The Church of Agile simply means following the Agile process. The process starts with forming a team of no more than 7 members. At the start of a sprint everyone must get together for a planning meeting and figure out what task cards will be created for the sprint. Every day of the sprint, forward progress must be interrupted so everyone can stand in a circle called a scrum and say what they did since the last stand-up meeting, what they will be working on, and when they are finished talking they will say "no blockers" letting the person to the right of them know that it is their turn to talk. At the end of the sprint is a retrospective meeting which includes demonstration in front of the team and product manager, which usually involves running tests or showing random numbers moving that no one knows what they mean and then talking about everything wrong with the group, the project, and the company. The punishment for not following these rules correctly is to have 1 to 2 hour long meeting on how to have meetings.

Every Agilian is required to tell everyone they know about how great Agile is. That includes co-workers, friends, your grandmother, and your neighbors in the form of door to door "friendly visits". While explaining Agile make sure you appear to be brainwashed by some kind of cult (which Agile is clearly not). The creepier the better. While you're at it, spread around this website.

There are other sects that have broken off from The Church Of Agile including Kanban and Variant Agile (commonly known as Vagile). We consider these people to be traitors with false beliefs.

The Great Agilian Prophecy warns about the upcoming Scrumpocolypse that we must prepare for. The warning signs of the Scrumpocolypse come to us in the form of four horsemen: 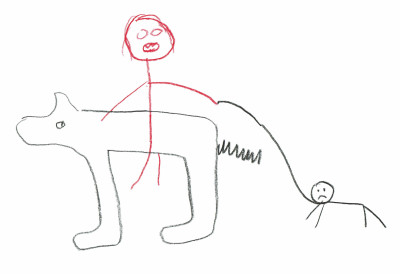 This is a picture of the Horseman 4 as he escorts a canned employee out of the office.

Have a question or comment about Agile? Send an email to Luthor The High Priest (luthor.priest@aol.com) and your question shall be answered. You can also follow us on Twitter https://twitter.com/churchofagile